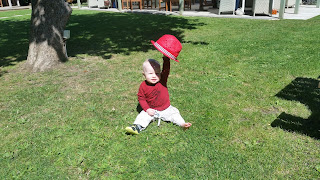 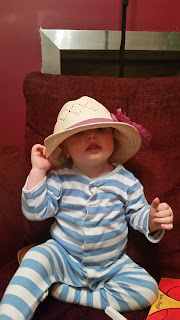 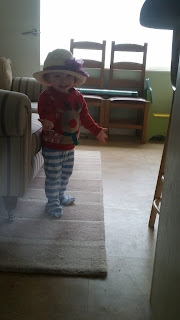 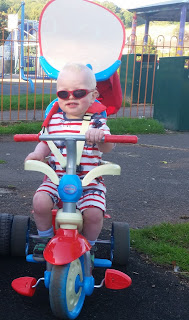 He is not even two yet and he already has his own total sense of self, he likes to choose his clothes and loves an accessory, whether it is Daddy's watch or a random bag, hat, or necklace that he has found somewhere. He wears them with style!

Over the last few months as he has learned to undress himself he has started to make more decisions about what he wears (or doesn't) and now vetoes clothes when we are out shopping. 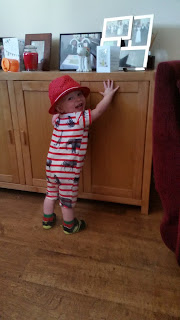 Due to his ENORMOUS head, we need to buy him a new sun hat as his sort of 'sits' on top rather than actually being worn but we are having trouble. He is struggling to find one that he likes. (First world toddler problems! FFS!!)

Over the last month or so he must have tried on 30 hats and none of them have been up to scratch! Well, that's not true, he found one in M&Co that he took off a shelf but it was age 7-9 and too big even for his ridiculous head (he needs age 4 even though he's not even 2). It was a pale blue boater type hat with palm leaves on it and a ribbon around the rim. He had a total head fit (if only the hat did!) when I told him he couldn't have it, it was literally down to his chin. They didn't have a smaller size and he threw each and every other hat down with disdain.

It is beginning to become somewhat of an issue, he is so fair and it is getting sunnier by the day. I shall not be beaten, I shall not be discouraged. We will continue to go hat shopping and try each and every one until he finds THE hat. I just hope to God that when we do eventually find one that he likes, which we will because I am NOT a quitter, that I don't fucking lose it!
Posted by ComplyOrCry at 03:28:00